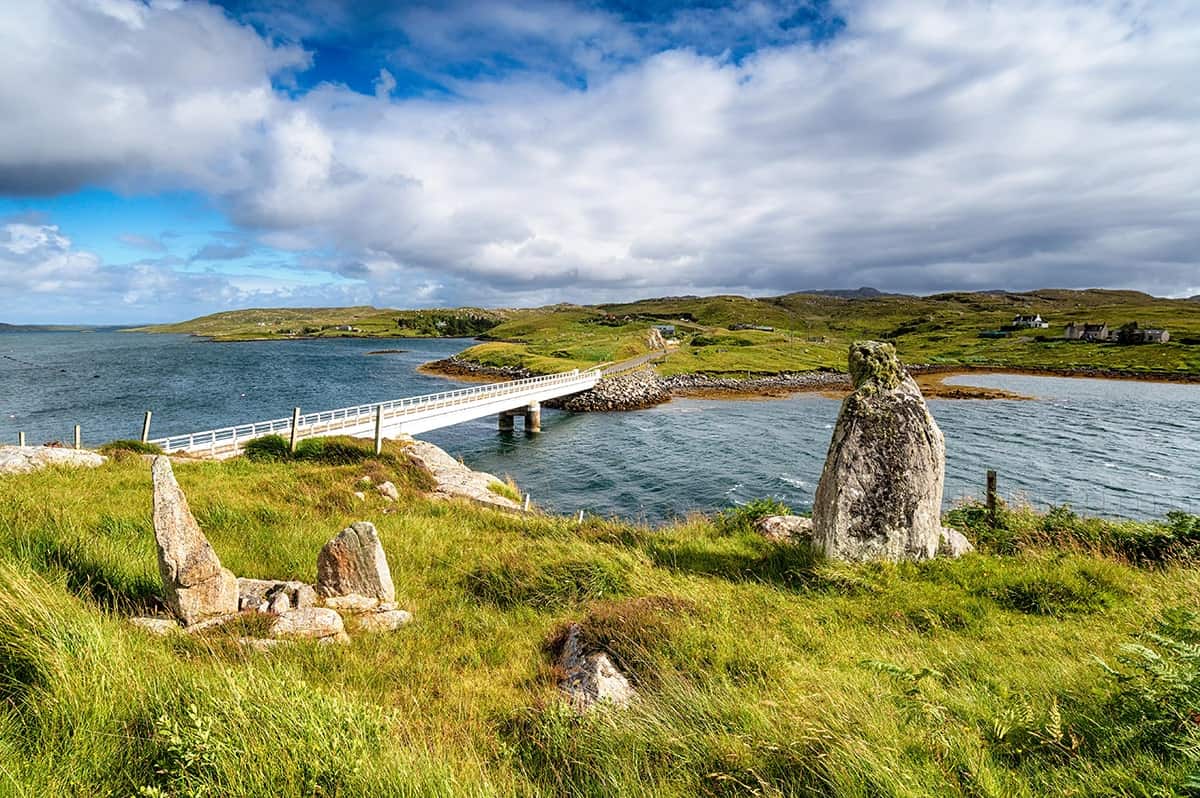 Hebrides Islands are located off the western coast of Scotland. The chain of isles looks cold and impregnable, yet with its unexplainable charm, it attracts hundreds of tourists and hikers. Picturesque landscape, quirky sea sights, huge rocks, high waves, and majestic castles make the guests of the islands immerse in the times of brave knights or a gloomy Scottish tale. Let us consider the main Hebrides Islands and places worth seeing there.

The Hebrides are situated in the Atlantic Ocean, along the western coasts of Scotland. They are a part of the British Isles. Generally, there are about 500 islands in the archipelago, 100 of them inhabited.

A long time ago, a giant piece of mainland broke away from the continent into numerous small isles. It was the way the Hebrides appeared, with an area of 7,200 km2. Due to its geographic location and plethora of lakes, the islands are subject to a special climate, with frequent rains, mists, and winds.

According to travellers, the weather here is very unstable, and in a manner of minutes, a clear sky may become overcast. Sun and rain trade places. Steady sea waves suddenly form into huge breakers.
But do not get upset, the sun will shine again soon.

Outer islands are separated by the Minch Strait. They lie northwest of the archipelago. Inner islands are located near the coast of Scotland.

Outer Hebrides or the Western Isles make up one of 32 administrative units of Scotland. They consist of 70 islands, 15 of them inhabited. The territory host about 27,000 people. The largest islands in the group are Lewis and Harris, North Uist, South Uist, Benbecula, and Barra.

Interestingly, the Outer Hebrides host more than 7,500 freshwater lakes, which makes up almost a fourth of all the lakes in Scotland (fathom that: in total, there are 31,000 lakes of different sizes in the country).

Tourists come here both for adrenaline and calmness. Each day there are dozens of activities available: mount hiking, sea cruises, horse-riding, and even diving with seals. What concerns the cold and least favourable season, you will be welcome in local pubs. It`s always interesting to taste traditional cuisine and talk with islanders living in Outer Hebrides, Scotland.

The Inner Hebrides are located closer to the continent. This region consists of 79 isles, 35 of which are inhabited. The Inner Hebrides are conventionally divided into two groups, the Northern and the Southern. The southern group belongs to the Argyll and Bute council region and includes Jura, Islay, and Gigha. The northern part belongs to the Highland unitary council region, with such islands as Skye, the Small Isles, and the Summer Isles.

There is a large bridge between Skye Hebrides Island and the continent. Other isles are accessible by sea. Tourists can enjoy various sights, tours, sails, and workshops. Even if you like walking on your own, you will find some nice places. The landscapes on the aisles are marvellous. The main advantages are wild nature, calm beaches, high-quality local food, and the hospitability of the islanders.

Read also: Private Islands for Sale in Scotland 2021, Life in the Wild

Interesting Places in this destination

Living on an island is great as it is. In addition, the archipelago is rich in special sights, both natural and man-made.

Staffa. Fantastic scenery makes your heart skip a bit. Here you can find high columns of basalt with a lot of caves. One of them, Fingal’s Cave, has great acoustics. People call it the “singing cave”. High tide voices are amplified in the cave and make you feel as if in a magnificent cathedral. The cave is protected by UNESCO since 1968.

Lewis Island. The island has an interesting history and even more interesting traditions. It hosts the enigmatic Callanish Stones – a circle of 13 high stones with a monolith in the middle. It is supposed to be a ritual ground. Some scientists claim that the mysterious stone circle was erected by the adherents of the Moon cult about 5,000 years ago. In addition, there are other mystical structures in this territory, including grave mounds and burial vaults.

Lewis and Harris Island. It is a large island divided into two parts with a narrow neck of land. This beautiful spot is deemed to be the heart of Scotland. On the north of the island, there are peatlands, while the south with its breathtaking beaches is favoured by tourists.

Skye Island. Skye with its mountain ring the Quiraing in the north resembles a city from a fantastic world. It is called a pearl of Scotland and a reserve of virgin nature. Castles, bridges, and old buildings are in harmony with marvellous landscapes, hills, rocky protrusions and bays. The main sight of the isle is a rocky peninsula with its basalt blocks over the glass of water.

North Rona Island. It is the remotest isle of the archipelago. It is so distant that often cartographers forget to include it on the maps of Great Britain. A lot of centuries ago, Christian ascetics inhabited the island. Then people of Scandinavia occupied the Hebrides. Rona is a part of Scottish Natural Heritage as a reserve hosting Atlantic grey seals and sea fowl. There is also a lighthouse on the island.

Hebrides Islands include some private isles, such as Taransay. This isle with an area of 3,445 acres is situated in the Outer Hebrides of Scotland. It is fully owned by the Kelliher family.

Hebrides Scottish Islands are truly a fantastic world on our planet. Do not miss a chance to visit these beautiful lands.

European private islands are available for sale on Find Islands by the link.