“Ostriv Zmiinyi” – Snake Island as a Symbol of Ukrainian Bravery 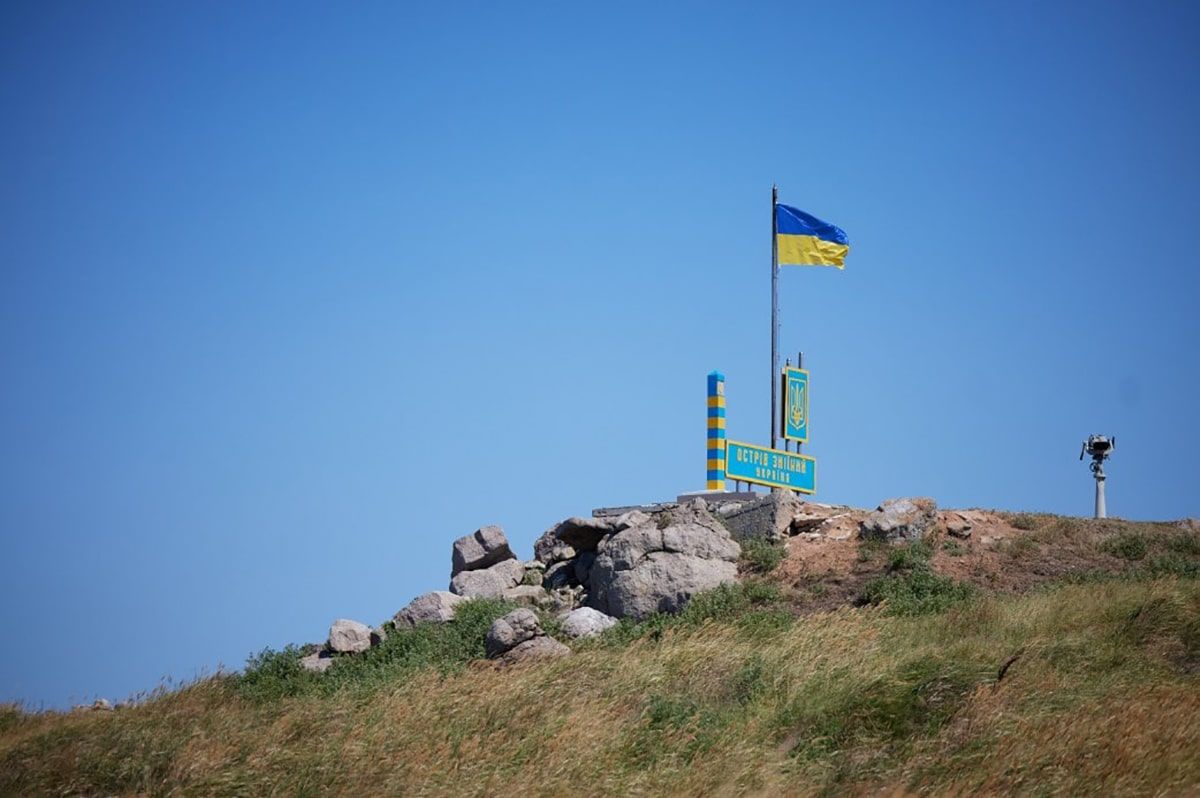 Snake Island is one of the Ukrainian islands. Ukraine is not a 1,000-island country yet it has lots of beautiful islands worth visiting. One of them is Ostriv Zmiinyi, the symbol of the war held nowadays. Yet even before that, this island was a matter of interest for numerous tourists. Let’s discover that island in Ukraine and learn about its heroic and interesting background.

Where is Snake Island in Ukraine located?

The geographic coordinates of the island are 45°15’18 northern latitude and 30°12’15 western longitude.

This little but brave piece of earth is the island Ukraine owns since its Independence was proclaimed. Based on the north-western part of the Black Sea, Snake Island is one of the most mysterious parts of that land.

The island is planted near the peninsular-western part of the Black Sea, about 37.5 kilometres from the coast to the exit from the Danube delta. This fact played a great role in Zmiinyi Ostriv’s history over time.

The Historical Background of a Snake Island in Ukraine

The island was known to the ancient Greeks. The first mention of it refers to VII BC as it was called Levca (White) Island in Greek chronicles. Popular Greek chroniclers like Ovid, Herodotus, and Strabo wrote about it in their chronicles.

That was an important destination point on the road to the towns of the Pivnichne Prychornomorye, the part of the Black Sea shores that was a trading centre of that time. Here lots of Greek towns-colonies were established. More than that, the island became a part of legendary ancient Greek mythology. According to the legend, the goddess Thetida lifted that island from the sea for her son Achilles, the hero of Homer’s sagas Iliad and Odyssey. In honour of the rest, the ancient Greeks built a temple on the island that is still known as Achilles’ temple.

The ruins of the temple of Achilles were preserved right up to the beginning of the 19th century. At that time, the island was flooded by the Russian Empire, and the maritime officials called for a new lighthouse. Shards of transporting materials for the life of the lighthouse were too expensive so they decided to ruin the rest of Achilles’ temple and use the remains for construction. The lighthouse, of the temple, was saved on this day and it remained the core of the island.

The Snake Island passed from hand to hand. It was under the Russian Empire’s jurisdiction until 1853. Then it was handled by the Moldavian Principality. Then there was a Romanian army legion based on Zmiinyi Ostriv. Only at the time of WWII Soviet Union’s army conquers the territory and it was attached to the SU.

Since 1991, Zmiinyi Ostriv is a part of independent Ukraine. There was a regular ecologists’ lab and a perspective offshore gas and oil field discovered in the late 80s. That fact had made Romania and Ukraine Snake Island competitors for a while until the Hague court in 2004 had established some credibility claiming Zmiinyi Ostriv the property of the USSR.

Moreover, if you call now what is Snake Island of Ukraine now, you may see that it is more about Ukrainian bravery and honour than any other piece of land. In the terms of Russian mean invasion, 13 Ukraine soldiers on Snake Island are heroes of the same value as Azovstal defenders. They are legends. More on this at the end.

Why Is Snake Island Called So?

The name Snake Island Ukraine was transliterated into Zmiinyi Ostriv refers to the high number of snakes. Does Snake Island in Ukraine have snakes? It does! But these are snakes that come with the river flow from the Danube whose delta is close to the island.

During the period of flows in midseason, river snakes go to the island with the water sometimes keeping on the branches or wood pieces. The name of Snake Island did not appear immediately. The ancient Greeks called it Levkos, which meant a White Island. The Ukrainian name of the island appeared in the 19th-20th century. Besides, this name was supported by other states who take the island under the control. At the time of the Romanian government, it was named Insula Serpilor. Under the Osman Empire, the island was called Yilan Adasi or Fidonisi.

A Snake Island on the Black Sea was playing multiple roles. First of all, it was an outpost of the Ukrainian border service. Since the 1960s, there was an air defence point. During the times of Independence, Ukraine soldiers on Snake Island were demilitarized and the island was primarily used for recreational and ecological means.

How big is the Snake Island of Ukraine?

It is a small piece of earth with a surface of 17 acres. Its shape is cross-like. It is covered with steppe grasses and fewer trees are growing there. Yet its surface keeps its wild beauty that became a matter of interest for tourists who love wildness. Besides, there was a scientific research point of Odessa National University that specialized in geography, geodesy, ecology, biology, etc. The infrastructure of an island contained even a bank office along with a cable network, Internet communication point, several shops, and residential property. Until the February of 2022, there was a population of 80+ locals and lots of tourists who visited the island regularly.

The Symbol of Ukrainian Bravery

Since the start of the Russian Federation invasion, the name Snake Island became iconic. On the very first day of the invasion, February, 24th, the island was attacked by the Moscow warship, which was poorly drowned by Ukrainian militaries.

The popularity of the Russian warship fucked by Ukraine Snake Island was great. The matter was in the appeal claimed by the Snake Island, Ukraine to go fuck yourself. The phrase told by Roman Grybov, one of the border men, became a cult. Today, it is one of the symbols of Ukrainian strength and willingness to victory in the war.

Since then, Snake Island of Ukraine for Russian warships became a kind of Armageddon. Its defenders have sunk the Russian corvette Vasiliy Bykov, one boat of Serna class, two Raptor boats (one more was crucially damaged), and the flagman boat of the RF, Moscow. The boat that got the first appeal from the island defenders had sunk after being really fucked by Ukrainian missiles.

Due to this story, a boom in the popularity of postage stamps arose in Ukraine and abroad. Specifically, one postage stamp, the design of which was created by the Ukrainian artist Boris Groh.

A coincidence of circumstances added symbolism and value to this stamp – the day after it was released, the Ukrainian military really did send the Russian ship to the bottom of the Black Sea.

And Ukrposhta sold half a million stamps with a message for the Russian ship already in the first 5 days. There were daily queues under the post offices, one stamp was sold at a charity auction for 5 million hryvnias (all the money was sent to help the Armed Forces of Ukraine).
In addition, the stamp was available on Amazon, eBay etc.

It seems sad to watch the pre-war Snake Island, Ukraine video as the flourishing land is now put on fire. But it will flourish again, no doubt. Today, the Russian military had occupied the island. There are air defence systems located along with multiple launch rocket systems.

Did Ukraine take back snake island?

The bravest state has done it several times before. There is no doubt it will come back to Ukraine soon. There is no alternative to this as bravery and heroes are always winning.

So we can hope that with time, everyone will get an opportunity to visit that wasteland piece that proved lots of times that size matters nothing. Only bravery and persistence are important. Like snakes that persistently launch Zmiinyi Ostriv’s shores, its defenders will gain success one more time. And that time will come even sooner than everyone may expect.