British Virgin Islands. Tortola — the most notable of the BVI 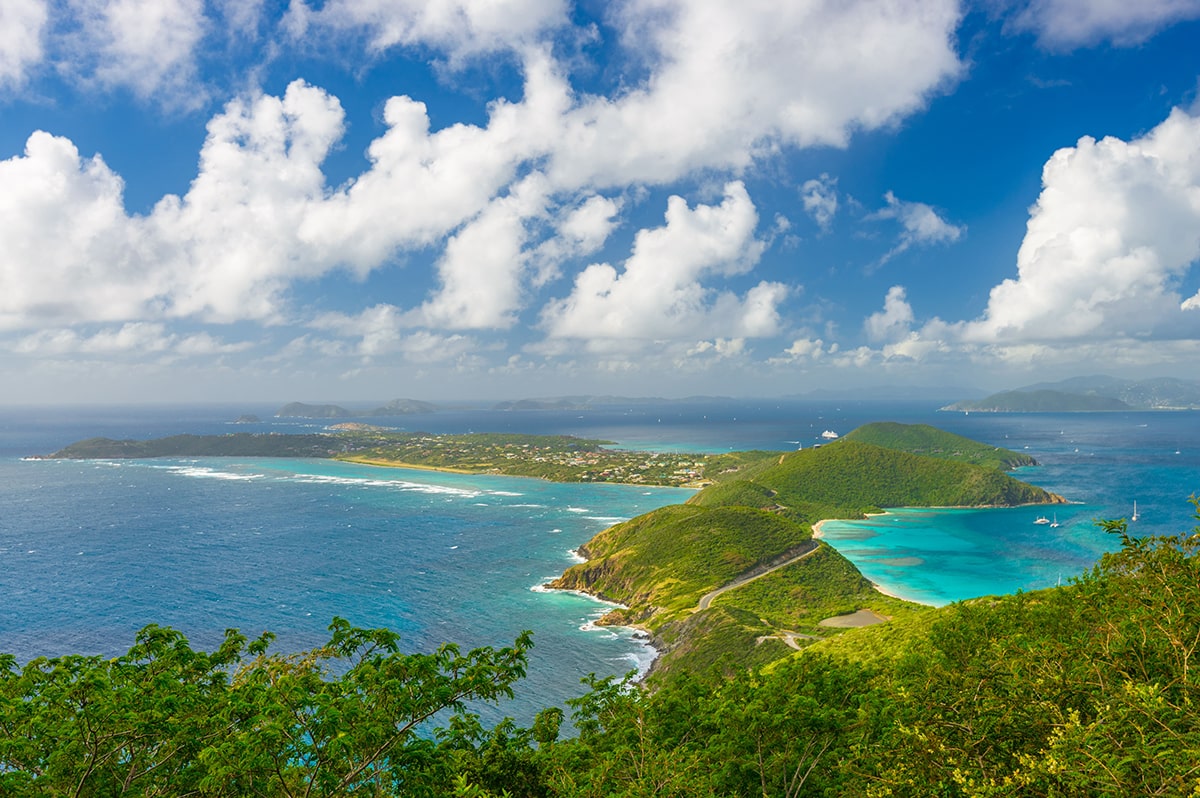 The British Virgin Islands is what comes up when you imagine your ideal rest at the beach. Bright blue ocean, white sand, tropical plants, and plenty of sunshine – this is what the BVI are naturally rich in. Travellers from all over the world come to the isles to experience the exotic world, spend an unforgettable weekend with friends or, vice versa, enjoy calm unity with incredible scenery. We will gladly tell you more about the British Virgin Islands, Tortola, and local tourist attractions.

Where are the British Virgin Islands? Features of the land

BVI is represented by a chain of isles in the eastern part of the Caribbean Sea. They structurally belong to the Virgin Islands. Apart from Britain, those are held by the USA and Spain. From the east of the BVI lies Anguilla, from the north they border on the northern part of the Atlantic Ocean, and from the west, they border on the Caribbean Sea.

Such a perky location of the British Caribbean islands creates the relevant climate – subtropic, mild and pleasant all year round, which naturally facilitates the flow of tourists. Tropical heat is held back by trade winds blowing from the northeast. Most time of the year, the islands are ruled by these winds. The average annual temperature on the BVI is 26 °C (78 °F). One can define two main seasons: dry (from February until July) and wet (from September until December). There is a rather nasty feature on the British Virgin Islands – hurricanes. This natural disaster comes over the island once every 8 years, on average. The latest hurricanes were Irma and Maria in 2017, causing serious damage. Thankfully, disasters can be forecasted, and specialists make up a detailed time and path of hurricanes.

Read more: Private Islands for Sale in the Caribbean

Fauna and flora of the islands

The islands flourish in tropical plants. The thin soil layer favours colourful Royal Poinciana Trees and gorgeous flowers. In addition, you can find mango, shamrock, coconut palms, and breadfruit here. Hills are occupied by cocoa trees and wild orchids, while lowland is dominated by cacti, acacia, and sugar cane. According to the U.N. FAO, forests occupy almost 27% of the territory of the BVI. The animal world is mostly represented by reptilians, birds and other small animals. Widespread species are lizards, geckos, iguanas, tortoises, and all kinds of frogs. The bird family is represented by seagulls, flamingos, pelicans, pigeons, and falcons. Coastal waters and shores are full of sailfish, silverfish, marlins, kingfish, and wahoo.

How Many Islands Make Up BVI?

According to the official data, the territory of the BVI is made up of 60 islands and coral reefs. The largest islands are Tortola, Virgin Gorda, Anegada, and Jost Van Dyke. Only 16 islands of the BVI are populated. The total population of the British Virgin Islands as of April 2022 totals 30,591.

Features of the main isles in the BVI.

We would like to dwell on Tortola Island in some detail. As we have said, it is the largest isle in the BVI group. 80% of the population of the British Virgin Islands is concentrated here. Tortola is the destination of choice for a lot of tourists. It is not a coincidence. The island is rich both in tropical nature and very diverse cultural heritage. Any kind of rest can be enjoyed here.

Thus, one can lie by the sea all day, go on a sea cruise, engage in hiking, or spend some time in one of many island bars. Fans of delicacies may sign up for tasting tours where they will be offered the most popular national dishes. The island cuisine is mostly represented by seafood cooked on an open fire. Tortola BVI is also a popular ecotourism spot.

Road Town is the capital of the British Virgin Islands. It is situated on Tortola near Road Harbor. The town is shaped like a horseshoe. It hosts the most popular tourist sights, such as Mount Healthy National Park, the J.R. O’Neal Botanical Garden, Folk Museum, Mount Healthy’s Wind Mil, etc. A lot of spots are ideal for diving and snorkelling. However, the most popular place is Scuba Dive RMS Rhone Shipwreck. It is an underwater kingdom of the Caribbean basin with a sunk ship, coral gardens, and unique merpeople.

Is The BVI Open For Tourists?

Are the BVIs open? Yes, the British Virgin Isles welcome tourists and remain a popular vacation destination, specifically, among the citizens of the USA. However, please be aware of Covid-19 limitations. Now, as of April 2022, the entry of tourists to the BVI is allowed. Nevertheless, arrival is subject to clear conditions on complete or partial vaccination and entry limitations for those who were not vaccinated. You can find out about the current quarantine measures here.

Private Islands for Sale in BVI

More than a dozen of small BVI isles are up for sale. Some of them were clearly never touched by a human foot, while the others are well-established resorts waiting for new owners and investors. It is truly a unique opportunity to buy an island in the Caribbean Sea on special terms.

The government encourages foreign investment and foreign buyers. Naturally, to buy an island, you must fulfil all the sale stages and get a non-belongers land holding license (NBLHL). Please bear in mind that the purchased realty with an NBLHL license is a special property which cannot be transferred.

Also, please be reminded that on our website you can find private islands for sale and rent, and add one of your own to the Find Islands catalogue. All the European private islands available for purchase you`ll find by link.