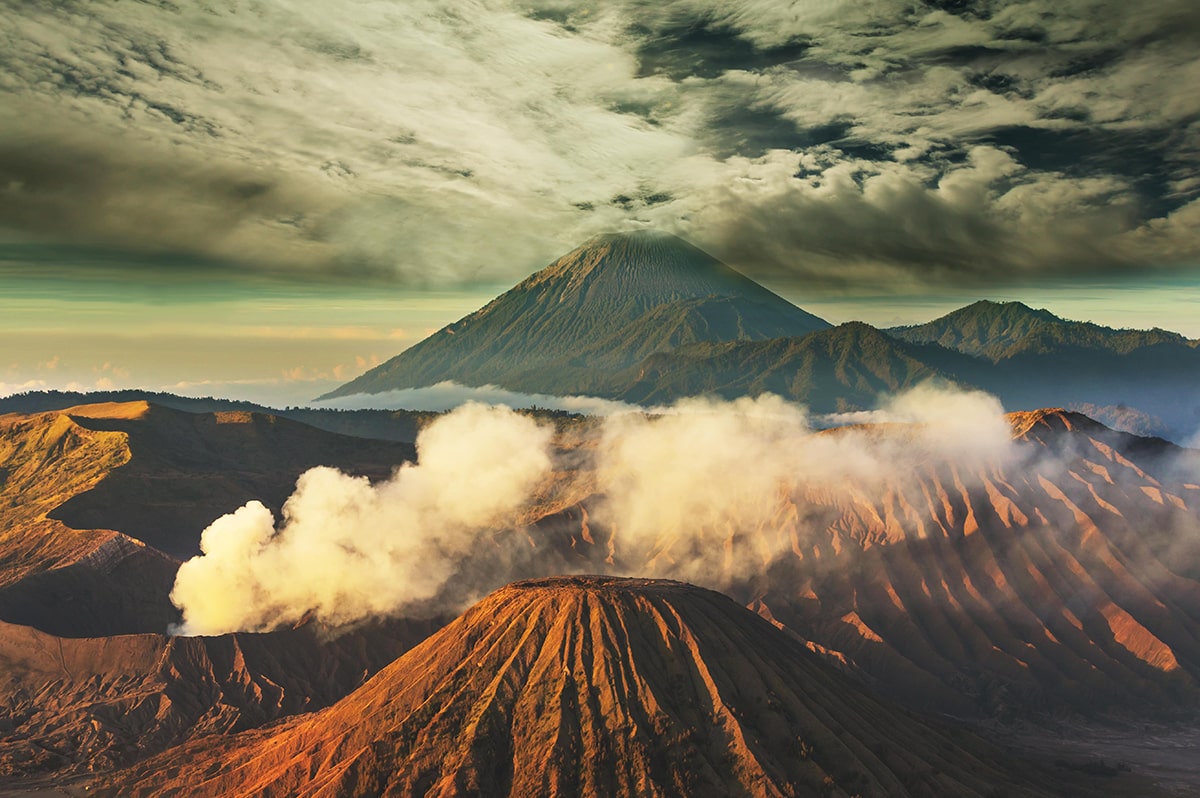 Forbidden Islands — what do you imagine while thinking about this phrase? The first thing that comes to mind when imagining an island is the sea, sand, and coconut palms. The second things that come to mind are pirates and mysterious treasures. And only after that do you think of those places that are not at all welcoming to tourists. The reasons for banning islands may be different: the isolated tribes, protected areas, dangerous animals and plants, volcanic eruptions, special beliefs and rituals, or terrible events left in the memory of people. Moreover, there are illegal islands that you can’t visit, and that is what this article is about.

Here are 7 islands you should never visit.

Enewetak is a group of 40 islands in the Ralik Chain of the Marshall Islands. They are located around a large lagoon and occupy no more than 6 sq. km. They were magnificent islands with lush nature, exotic plants, and animals until the human hand touched them. After the U.S. military seized the area in 1944 during World War II, these islands were repeatedly used for testing air, land, and underwater nuclear weapons. Deep craters were left on the islands, and everything around them was polluted and destroyed. In 10 years from 1948 to 1958, 43 nuclear experiments were conducted.

Most of the explosions took place in the northern part of the atoll. As a result, the nearby islands and part of the lagoon became heavily polluted and dangerous for life.

In the fall of 1958, a moratorium on nuclear testing came into force, but defence programs of a less destructive nature continued on the atoll.

In the 1970s, U.S. studies of the island’s pollution began. It was necessary to find a way to solve environmental problems. As a result, contaminated soil and debris were mixed with cement, moved into the crater on Runit Island, and covered with a concrete dome, which was completed in 1980.

In the same year, local residents returned to the islands. After the atoll was captured and the area was turned into a military training ground, several hundred residents were relocated to other islands to avoid loss of life. The victims were given cash payments and considered radiation exposure claims. It was estimated that Enewetak Atoll should once again be safe for life.

However, in 2017, the Australian Broadcasting Corporation said the situation was worsening. Because of climate change and rising sea levels, radioactive material is even now leaking out.

So, don’t be surprised that Enewetak Atoll won’t be on lists of ideal vacation spots for much longer.

The island belongs to the Andaman Archipelago, located in the northeastern part of the Indian Ocean. Legally, North Sentinel Island is part of India, to be precise, it is an Indian Union Territory. However, in practice, the island is a separate territorial unit, and tourists are not welcome here at all.

The island is home to the indigenous Sentinelese people. These people are in voluntary isolation and do not let anyone near the island. The Sentinelese defend their right to land and their peace by force. On several occasions, the islanders attacked boats that came too close and even killed fishermen. But the government did not persecute the Sentinelese, for there was a law against visiting the island. Therefore, North Sentinel is one of the islands you can’t visit.

The island region is protected by the Indian Navy. One of the reasons is that because of isolation, the immunity of islanders is not adapted to diseases developed in different parts of the world and may not be able to cope even with what has become customary for us. This happened to the Amazon tribes in Brazil, where the mortality rate increased by 80% after contact with people from the mainland.

The Indian government monitors the situation on the island remotely. A few years ago, authorities took the edge off a strict ban on visiting the island. Now anthropologists and researchers can land on the island with prior consent. However, it is not suitable for tourism purposes.

It is not really an island, but just a small part of the Japanese Honshu Island that is forbidden to the general public. Here is The Ise Grand Shrine, a shrine complex in the town of Ise, in central Mie Prefecture. It is a sacred place intended for worshipping the sun goddess Amaterasu. Interestingly, the shrine is destroyed and rebuilt every 20 years to reflect the cycle of life and death. Only priests and members of the Japanese imperial family have access to the shrine itself. It is off-limits to tourists. The best you can do is to take a walk on the forest paths nearby.

Another name for this land is Snake Island. Such a toponym hints that herpetophobes do not belong here. But they are not the only ones. Perhaps this is the worst island in the world. The land here is simply teeming with snakes. It is estimated that this island in Brazil may be home to up to 4,000 specimens of golden lancehead. The bite of this species of snake is poisonous and leads to death within hours.

By the way, we already mentioned this island in the article 4 Strange Islands on The Earth.

This is a group of New Zealand’s most remote sub-Antarctic islands, located on the eastern edge of the Bounty Plateau. Since 2014, there are islands that are forbidden to visit as the islands have been considered protected areas. Like the other sub-Antarctic islands, the Antipodes Islands are home to endemic fauna and flora. For example, Antipodean albatross, eastern rockhopper penguins, and others live here.

This is the kind of island where vacation is not particularly enjoyable. The reason for this is the weather conditions with strong winds, rain, and fog. Shipwrecks often occurred near the islands.

It is a forbidden island for tourists because it is dangerous to be here for many reasons; no mysticism, only natural disadvantages. Nevertheless, you can visit these lands as part of an expedition with a guide. It is necessary to obtain a special permit.

We wrote about private islands in New York. How about the information that there is an island you can’t go to, and residents really bypass it on the most remote roads? The North Brother Island is located in the East River. Since 1885, a quarantine area for people with smallpox had been in operation here. The so-called Typhoid Mary also lived here. She is believed to be the first asymptomatic carrier of Typhoid fever. According to archival sources, she infected more than 50 people, many of whom soon died. Mary herself did not acknowledge the disease and refused to be isolated. She was forcibly moved to a quarantine area. A second time she was relocated to North Brother Island for life.

Now the island is not a quarantine zone, but it remained in people’s memories as a grey and unfriendly place. Today there is a bird sanctuary, closed to tourists. Visiting the island is also forbidden because of the dangerous state of the ruined buildings.

A similar fate befell Poveglia Island. It is a small peninsula in the Venice Lagoon in Italy. People who were sick with the plague were sent there. But the island’s horrors do not end there.

Poveglia Island was first used as a quarantine area in 1793. Seafarers arriving in Venice and staying in isolation due to a medical condition were sent here. This was the case for 20 years.

For the most part, the island is remembered when talking about the plague. Infirmaries for seriously ill people were located here. Their families were also brought in, even if the family members were perfectly healthy. Life on the island was often intertwined with the torments of hell. The sick were many, as were the deaths. Some 160,000 people are said to have died on the island. After death, the bodies were burned and their ashes were mixed with the earth.

At the beginning of the 20th century, Poveglia Island in Italy was again used as a quarantine zone. And in 1922 a mental hospital was opened here. This is another black page of the area. Psychiatry as a science was not yet well developed, doctors used experimental treatments such as lobotomies or some forms of torture. This did far more harm than good.

The hospital survived until 1968. After its closure, the island was used for some time for gardening, but soon all residents left the area.

Poveglia Island is now considered closed. You can apply to visit the island and the municipality is committed to reviewing it within 10 months, but you will probably be refused unless there is an important reason for the visit. You can approach the island by private boat, but you are not allowed to land.

Worst Island in the World

In our opinion, deliberate isolation from the world of some tribes and peoples is not the worst thing that can happen, and perhaps it is even for the best of the world. Intact sanctuaries are matters of worldview and culture. And even thousands of snakes on small restricted islands do not lead to horror unless one happens to be there. But that forbidden island in the world that was poisoned by human actions, radioactive substances, torment, disease, and death do cause horror. That is why the lands like Poveglia Island and Runit Island have a hard time returning to their normal lives and are reluctant to accept new residents. But time will pass, the wounds will heal, and smiling people will probably reappear on the island. And then the main thing will be not to repeat the mistakes once made.

You might find it interesting as well: Island Horror Movies and Thriller Films