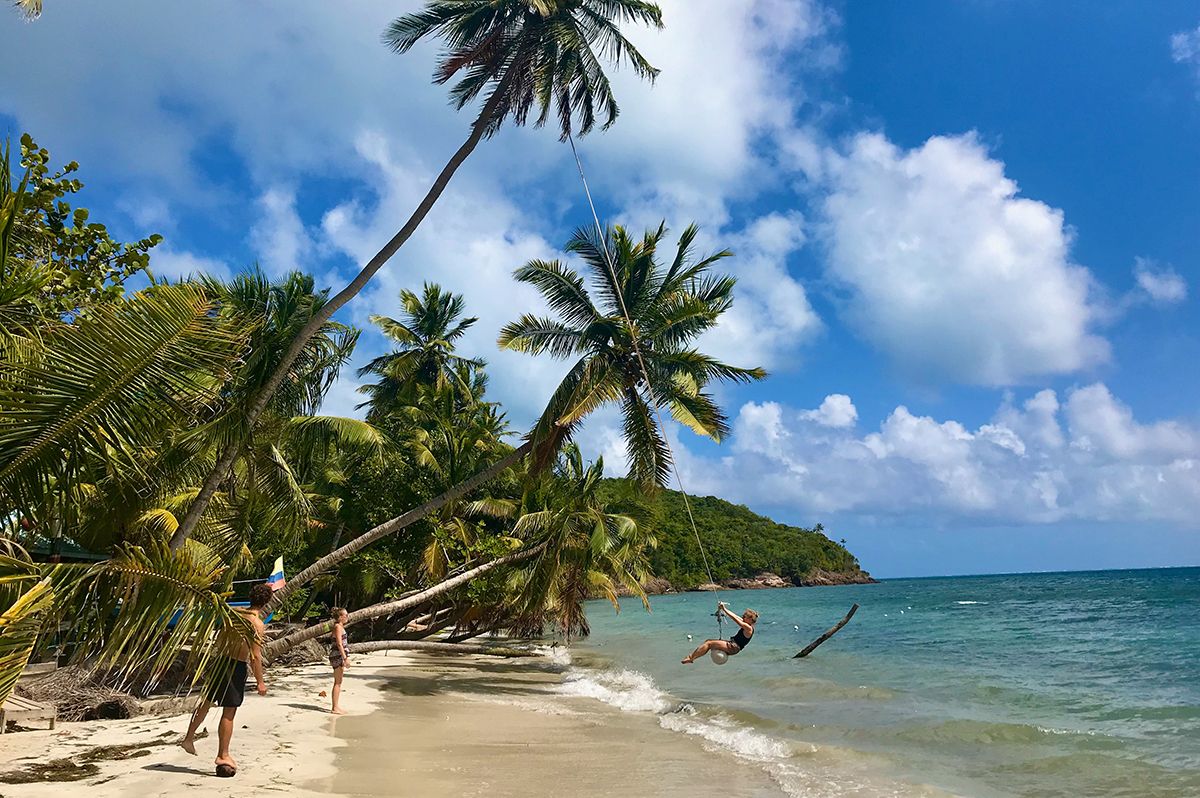 Have you heard about San Andres Island in Colombia? For most people, Colombia is associated with numerous drug cartels and low economic levels. But this country can highly surprise even a sophisticated backpacker with its beauty and overwhelming resort opportunities. Especially, if we talk about islands that are part of Colombian territories.

Today we decided to enclose to you San Andres Island — one of the hidden gems of that region. That place offers you no less than the most popular Caribbean resort or tropical island somewhere in the Pacific. So, are you ready to challenge yourself with a new experience?

First of all, you may ask where is San Andres Island located. From the geopolitical point of view, San Andres is Colombia. It belongs to offshore territories of that country. But in practice, San Andres is a multicultural heritage that unites native Colombians, Nicaraguans, and Jamaican natives. This combination of cultures creates a specific environment and atmosphere that overwhelms its uniqueness.

The island is located 470 miles from the northern part of the mainland. It’s a part of the Colombian Archipelago along with Providencia Island and Santa Catalina Island forming the big-3 Colombian islands. Besides its location in the heart of the Caribbean Sea, that island is also a part of the UNESCO Biosphere Reserve. What does it mean? You can see the biodiversity of the Caribbean in all its glory in San Andres. Besides, the status of the Reserve confirms the ecologically clean state of the island, its beaches and surrounding waters.

How big is San Andres Island?

No less interesting is the history of the island. In the 16th century, San Andres and neighbouring Providencia were real pirate colonies. And even before that, the path of Christopher Columbus lay through San Andres on his way to the New World. In the 17th century, the island became a refuge for the English Puritans, and since then, the islanders are primarily descendants of Puritan pilgrims. Although later the Spaniards encroached on the island, already from the middle of the 19th century it was firmly entrenched in what was then Central America. And since 1902, the ownership of San Andres Island of Colombia has been confirmed. However, claims to the island of San Andres did not stop until the middle of the 20th century, since its location often gave Nicaragua reasons to claim this part of the land.

Such a turbulent history could not but affect the island culture, which absorbed elements of both classical Puritans and Creoles, the culture of Colombia, Spain and Holland. What to talk about, there are even three official languages ​​in San Andres. Here, both Spanish and English, as well as Raisal Creole, have equal status.

Special mention in the story of the island of San Andres deserves its climate. This is a classic tropical monsoon climate in its purest form. Here, the dry season and the rainy season are very clearly distinguished. The first lasts from October to May, and the second is from May to October. During the rainy season on the island, there are up to 24 rainy days per month, and in total, there are as many as 220 of them per year. But the average monthly temperature does not drop below +26 Celsius all year round. Due to this combination, the riot of nature on San Andres Island is simply fantastic.
Real tropical climate, location in the heart of the Caribbean, what could be more beautiful for tourists? On the San Andres Islands of Colombia, it’s just the beaches!

The warm waters of the Caribbean and snow-white gently sloping sandy beaches have been valued by travellers for decades. And even if San Andres is located at a distance from the main Caribbean tourist routes, it only plays into your hands, because the number of tourists on the island is much less than the not-so-distant Bahamas, Jamaica, or Belize.

Of course, not only wildlife is the essence of San Andres Island. There are two large municipalities directly San Andres and Providencia. Just under 60,000 people live on the island. Major cities on the island are the capital of San Andres (it is much more commonly referred to as El Centro), La Loma and St. Louis.
It is around them that the cultural life on the island and its main tourist attractions are concentrated.

How to Get to San Andres Island for a Tourist

You will be surprised when planning how to get to San Andres Island. Besides air communication, there are simply no other means of communication with land. But you are given a choice of three countries at once, from where regular flights to San Andres fly. These are Panama, Nicaragua, and Colombia. The closest flight is from Nicaragua (Managua), although the cheapest flight is from Colombia. The price of a one-way ticket without luggage is no more than $50.

For luggage, however, you will have to pay about the same amount. By the way, be prepared for the fact that upon arrival at San Andres, right at the airport, the first expenses await you. The mandatory commission for visiting the island by foreigners is 112,500 Colombian pesos (the equivalent of $25). A little, but it can be discouraging. This payment was introduced primarily due to the status of a protected area on the island, and the fees at the airport go to the improvement of the island. On the island itself, the easiest way is to arrange a transfer with the host or rent a car if you plan to leave your place of residence and explore the island’s nature and culture.

Six Things You Must Do on Your Trip to San Andres

Colombia and San Andres are beautiful for their natural attractions. But not only do they form the tourist core. Let’s see what activities should be included in your to-do list.

Despite its modest popularity among tourists, San Andres has long been a mecca for scuba divers. Thanks to the perfectly clear coastal waters and rich coral thickets, divers find many routes and interesting places here. By the way, it is better to get a scuba diver’s license before arriving on the island. For example, a Tagaranga license will cost you much less than a San Andres license. If you do not have a license yet, there are several training diving centres at your service.

The Beachlife of San Andres

Beaches are the pride of the island. They deservedly occupy high places in the ratings of beaches in Central America. There are excellent shallow backwaters, and soft white sand, and besides, all the particularly annoying beach services have not yet reached here, so you can enjoy a pristine vacation. It is worth visiting Rocky Cay beach, which will surprise you not only with pleasant comfort but also with a small island right in the coastal waters, where it is easy to cross the water on foot.

If you like snorkelling, be sure to visit the western part of the island. There are practically no waves here, so snorkelers can enjoy the views of the seabed. By the way, many other tourist attractions are available on the west coast, such as water skiing and lounge areas.

Do you want a more active holiday? Then rent a boat and set sail! San Andres is surrounded by small islands of the archipelago, so even an amateur can swim between them. For example, you can go to the island of Johnny Cay, where you can swim and watch the local giant iguanas. It is also worth visiting the island of Providencia, the second of the three largest in the archipelago.

Tropical islands are always an unforgettable experience for naturalists. If you are not indifferent to nature, you will definitely be interested in San Andres. It has incredibly diverse flora, from mangrove forests to desert areas and rocky landscapes. On San Andres, you can see tropical mockingbirds, green-breasted mangoes, iguanas and lizards. And local marine life includes hundreds of species of tropical fish, sea urchins, crabs and oysters. By the way, do not forget to try the local seafood, because they are simply phenomenally tasty here.

Of course, San Andres Island is far from the ancient European cities. But it is here that the oldest church in Latin America is located. And the cities themselves on the island attract by their eclecticism and diversity.

Tourism on the island of San Andres began to develop actively only in the first decade of the 21st century. So, San Andres Island hotels are all fairly new buildings. Choose accommodations according to your preferences. If a variety of restaurants and beach activities are important to you, it is better to stay near El Centro and close to the airport. If you like to meet sunrises, the east coast is at your service. For lovers of authentic culture, the village of La Loma will be the best place. And if you decide to rent a car, there are no restrictions on your accommodation. On average, room prices in San Andres start at $11 (the equivalent of 50,000 Colombian pesos). The higher your requirements for comfort, the higher, of course, the price will be.

San Andres is the yet undiscovered gem of Colombia. This island has a long cultural tradition, excellent beaches, and good infrastructure. For divers and snorkellers, this is a real paradise. But for lovers of a relaxed beach holiday, it will be no less interesting here. Add to this the quite reasonable prices and you will realize that this is one of the best destinations for your next vacation.

You might find it interesting as well: Private islands for sale in South America: Brazil, Chile, Columbia, Argentina